After Farm-Aunt left, the most pressing matter of business was to get the roof on the tiny house!  But it wasn’t as simple as just climbing up there and nailing a roof on.  First there was a lot of work that needed to be done to make our tiny house structurally sound.

Without the extra hands to help build, Papa the Farmer enlisted my help.  So that meant that my hands were busy and I wasn’t taking pictures each step of the way like I had been when Farm-Aunt was here.  I’m going to tell you what we did in the order we did it, but you’ll notice that some of the pictures were taken after the roof was put on.  (Like the picture below.) 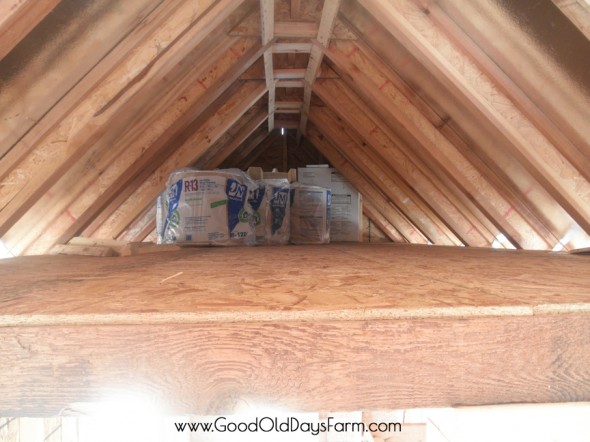 First, Papa the Farmer built the loft so that we would have something to stand on while we were working on the roof. 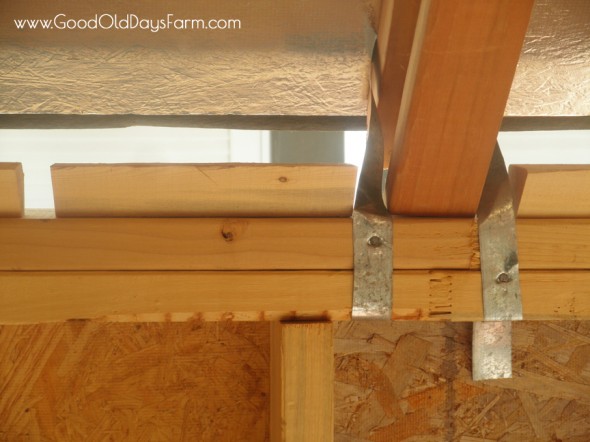 Next, he did something-or-other with metal to secure the trusses.  Then he put those wooden supports in so that he’ll have a place to nail the ceiling later.  (Good thinking!  I wouldn’t have thought of that… which is why I’m in charge of taking picture and not in charge of anything even remotely building related…) 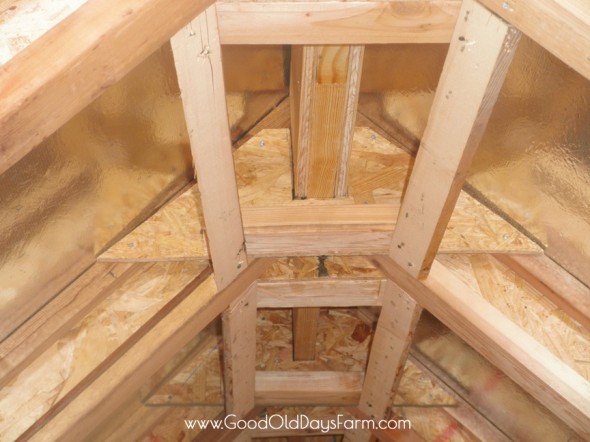 Then he reinforced the peak of the roof and again added wood so that he can nail the ceiling on later.  When I write about this on the blog this sounds so simple and easy, but in reality it was a lot of work and it took a long time. 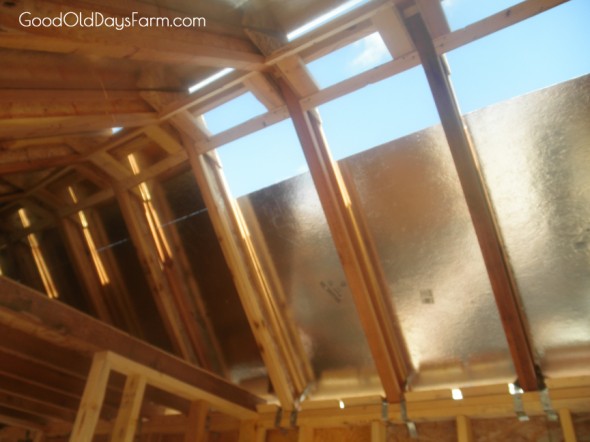 Finally he was able to put the plywood up.  Here in Texas the weather routinely is warmer than 100 degrees Fahrenheit during the summer so Papa the Farmer thought it would be best to use plywood with radiant barrier on it. 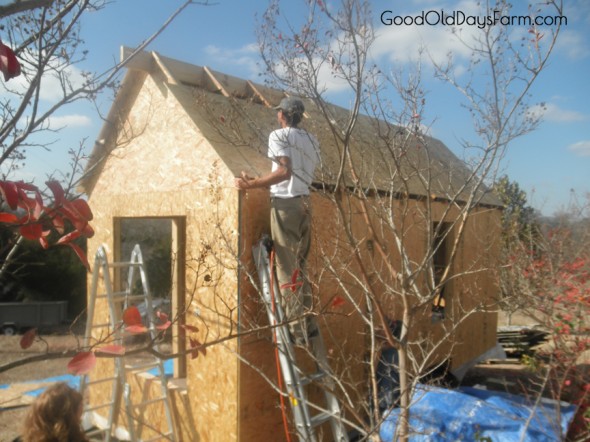 Did I mention to you that both Papa the Farmer and I are afraid of heights?  Not unreasonably afraid … just common-sense-I-could-break-my-neck-doing-that afraid.  He wanted me to climb up on that ladder and hold that wood for him, but there was no way I was going to climb more than 2 rungs up so Papa the Farmer pretty much had to manage this by himself. 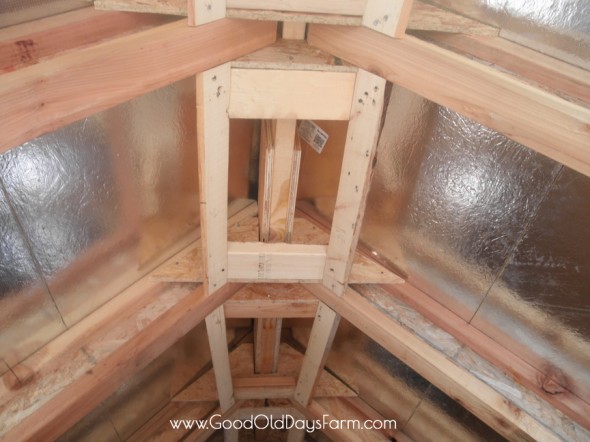 He did a great job!  Doesn’t it look good? 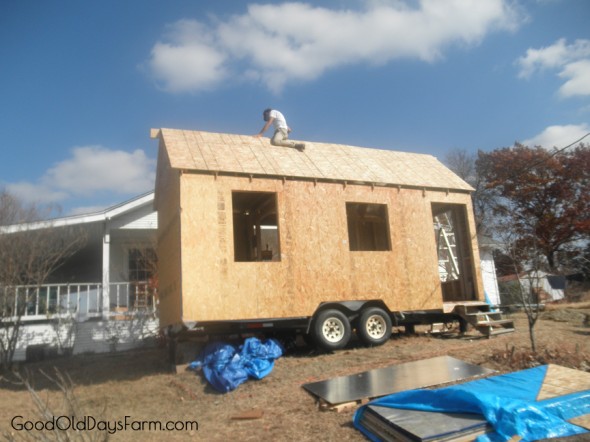 Look how high that is!  This is me keeping my feet firmly planted on the ground taking pictures while Papa the Farmer does the dangerous stuff.  He once had a summer job as a roofer.  At the end of the summer the owner of the roofing company asked him, “What did you learn this summer?”  The then-17-year old Papa the Farmer answered, “I learned that I don’t want to be a roofer.”  So, he’s not exactly having fun up there… 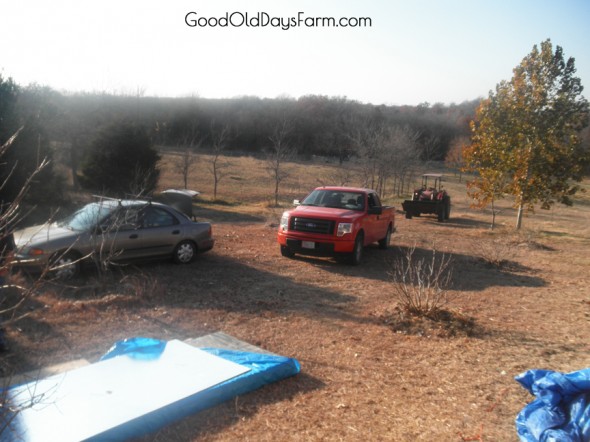 By this time, word about what we’re doing had gotten out in town.  Now remember, “Town” has less than 900 people in it so any kind of news travels pretty fast.  At about this stage of building we started to attract visitors… 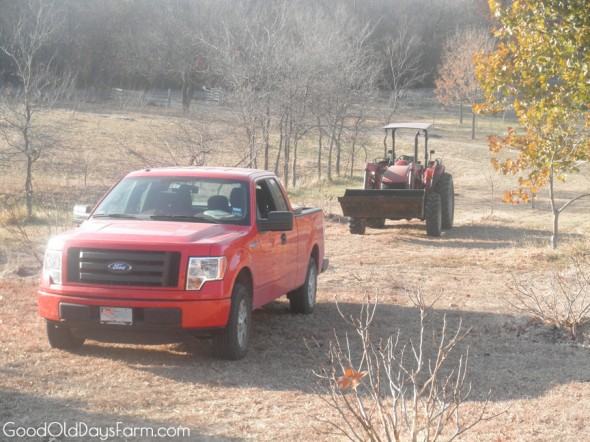 Yes, one neighbor really, truly drove his tractor to come take a look!  This is photographic evidence of my “You know you live in the country when….” moment! 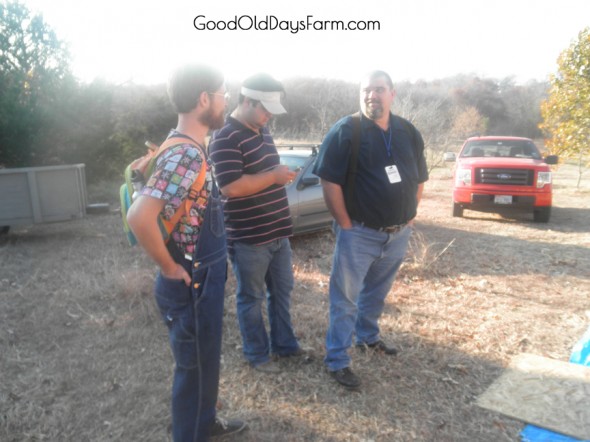 Some of the neighbors came up with creative and cute pretenses for coming by.  This week I’ve sold lots of soap and I’ve even sold 3 guineas, which is pretty impressive considering that we’re not even in the guinea-selling business!  Other neighbors came and were pretty open about just wanting to satisfy their curiosity by taking a look.  We’ve gotten plenty of unsolicited advice about this project!  The nice thing about living in the country is that the neighbors are pretty handy themselves so usually their advice is helpful! 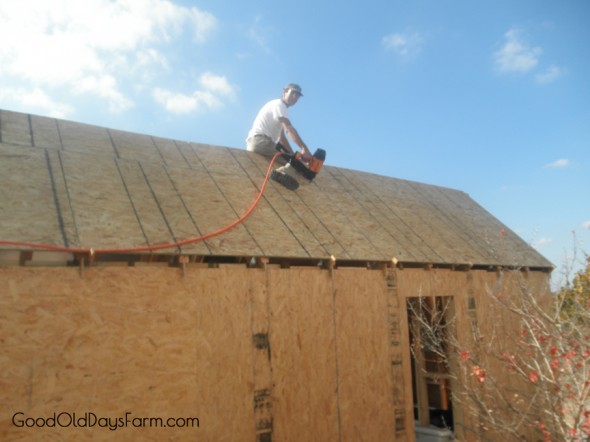 Of course, it would be more helpful to have someone up there on the roof with Papa the Farmer, but at this stage I was still committed to not going past the second rung on the ladder. 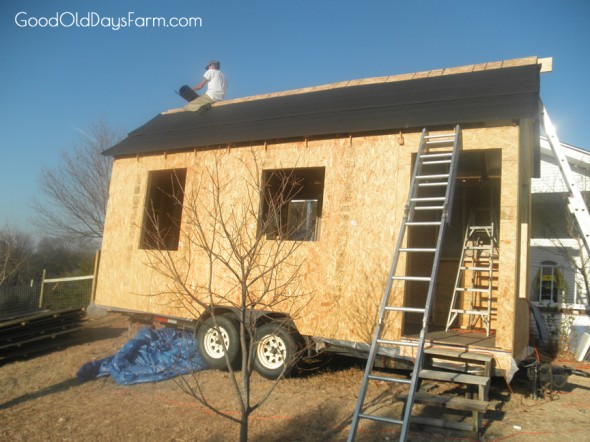 Finally, it was time to put the tar paper on the roof!  I prudently stood by watching and reminding Papa the Farmer to be careful because we have a $10,000 health insurance deductible.  He did pretty well all by himself until the wind came.  When the wind started blowing, the tar paper began tearing and flapping.  Papa the Farmer really did need a second pair of hands up there.

FarmBoy wanted to climb up there to help Papa the Farmer.  Apparently I am more afraid of FarmBoy breaking his neck than of breaking my own, because at this point in the story I did the unthinkable.

I climbed that ladder.  The one you see right there in the picture.  I climbed all the way until my feet were on the third rung from the top.  Way, way past my second-rung-from-the-bottom-common-sense-comfort-zone.  I couldn’t even hold on to the ladder because I needed my hands to hold on to the tar paper.  It was terrible.  I closed my eyes, didn’t look down and prayed that I wouldn’t fall.

They say that the best way to overcome your fears is to face them straight-on.  I don’t know who “they” are and frankly, I think “they” don’t know what they’re talking about.  Sometimes it’s perfectly acceptable to recognize your mortality and hang on to common-sense fears like the fear of falling from a great height and breaking your neck.  But you know what?  I’ve been up on that ladder a few more times this week and while I haven’t exactly become a ladder-lover… it’s not so bad up there either.

Building A Tiny House:  A Week of Framing

Correction:  In late November/Early December we did have some guests who helped with the process of building the tiny house.  The bulk of the work they helped with will be covered in another blog post, but this post incorrectly stated that Papa the Farmer put the roof on the tiny house by himself.  In fact, he did have our visitors handing things up to him (including plywood) to help the process along.  Credit goes where credit is due!

Tweet
Share
Pin
0 Shares
« Let. It. Go. by Karen Ehman
Our Tiny House Accident (And the Natural Remedy That Made It Alright Again) »