I suppose one of the first, most basic questions to ask yourself when building a tiny house is “Where shall we put it?”  In our case, we don’t plan to be moving the tiny house very often so we want to pick a great location right from the start!  Since we live in a very hilly area, we have decided to place the tiny house on a flat area right up next to the main house.   But the hill between the driveway where the trailer was and where we wanted the trailer to be is steep.  Today’s challenge was getting the trailer up the hill to its new resting place.

Papa the Farmer hooked it up to the tractor.  I watched them go up the hill, back down the hill, then try charging back up the hill for quite a while. 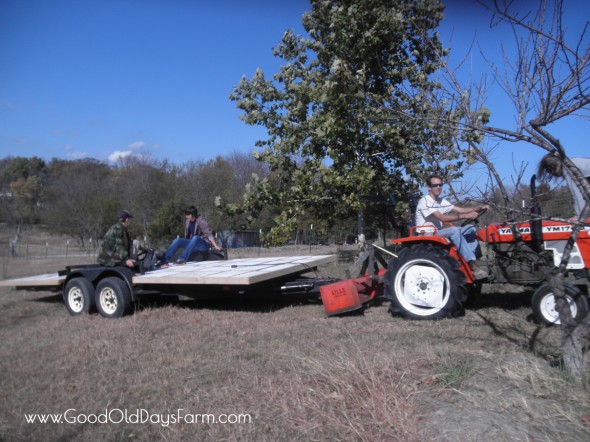 There was some discussion and Papa the Farmer came over to talk to me.  My brain fogs up when it comes to farm shop-talk.  “Tractor-yadda-yadda-yadda-pistons-blah-blah-blah-oil-yadda-yadda-lets-try-using-the-van” is what I heard. 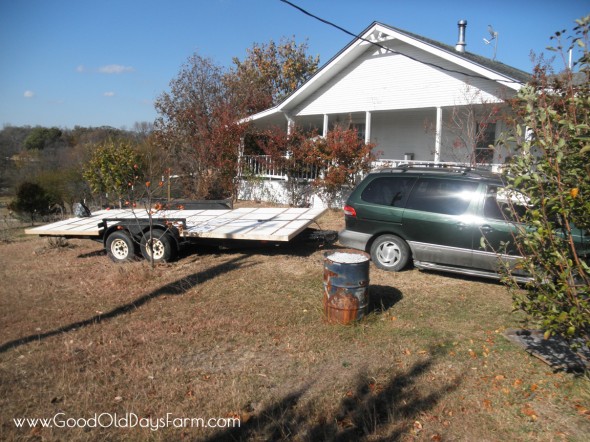 So they unhooked the tractor, hooked up the van and tried pulling the trailer up the hill again.  Back and forth they went.  Getting it close, but not getting it quite where they wanted.  The flat surface where they wanted to park the trailer is up a particularly steep incline on a hill so they were having some trouble getting it up there.  I watched them work at it for a little while… 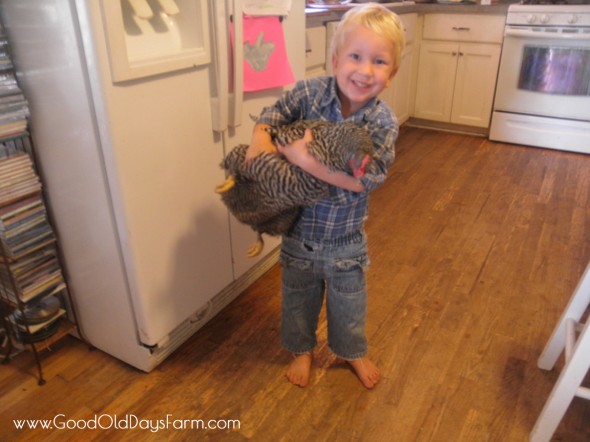 but a mother should never turn her back on a child.  Not even for an instant.  I went back inside to discover that FarmBaby was giving the chicken a tour of the kitchen.  “Are chickens allowed inside the house?” I asked him.  “YES!!!!”  he said.  “NOOO!!!”  I told him.  “Take her outside.” 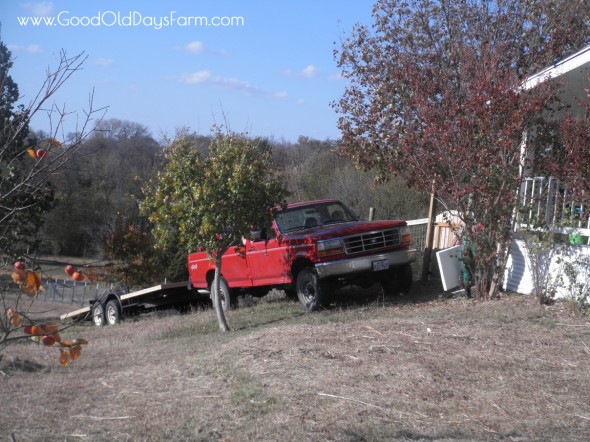 I went back outside.  Papa the Farmer had borrowed a friend’s 4×4 and although it was a tight squeeze, they were finally able to get the trailer up.

At one point while we were driving up and down the hill trying to pull that trailer up we looked over the fence and saw our neighbor driving a big covered utility trailer through his yard.  He waved at us, we waved at him.  Just another day out in the country, driving big old trailers through the yard.  No one seemed to think there was anything unusual going on.  Clearly, we don’t have a Home Owners’ Association!

Has this blog post bored you so far?  I wouldn’t blame you if it had.  It was a long afternoon of trying to get the trailer exactly where we needed it.  But finally it was in place and Papa the Farmer and Farm Boy stapled a sheet of plastic to the beams in the floor.  This will be a vapor barrier.  During the summer air conditioning can make the tiny house much cooler than the outside air and heating it in the winter can make it much warmer than the outside air.  All that can lead to condensation and the vapor barrier will prevent the moisture from damaging the floor boards.  This part was so easy a child can do it! 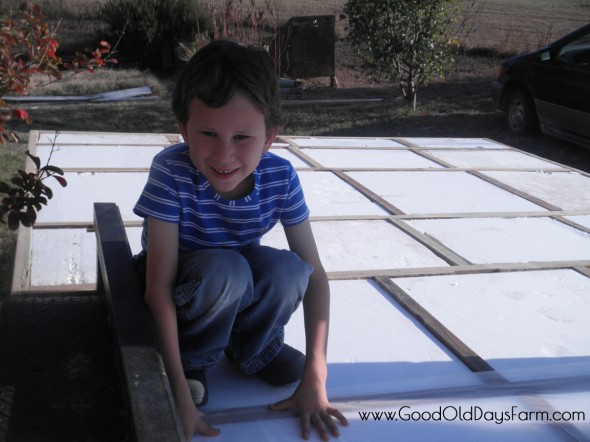