On to Day #2 of building a tiny house for Grandmother!  I think Papa the Farmer might have been feeling a little bit like, “How-are-we-ever-going-to-pull-this-off-in-the-timeframe-we’ve-got?”  When we think of all the details we still need it’s overwhelming!  We still need walls, a roof… Oops.  Those aren’t details!  Let’s suffice it to say that we still need everything, right down to switchplate covers!  Thankfully, Papa the Farmer had good helpers yesterday!  We are part of a educational and agricultural exchange program.  Right now we are hosting a young man from Oregon who helps on the farm in exchange for room and board.  We had made plans for him to come before we knew that Grandmother would be coming so he came expecting to do more farm work than construction, but thankfully he is easygoing and excited about the idea of building a tiny house.  So he’s helping!  We also had another helper.  For the sake of the blog I’ll call him The Wood Whisperer because this young man is amazing at building things.  He’s a local homeschool student who loves building!  He came over and was a great help!  Papa the Farmer said that they got four times as much work done yesterday than he had gotten done the day before! 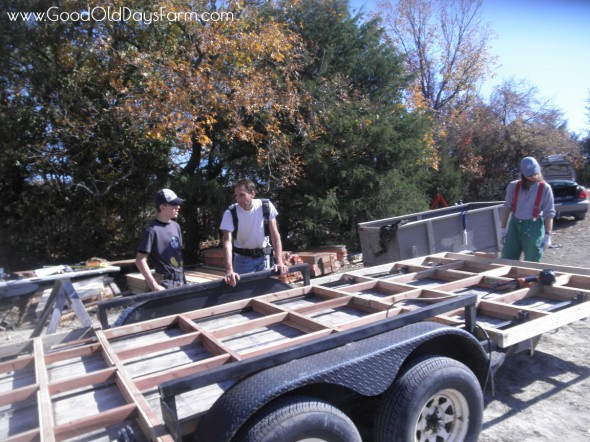 The first job yesterday morning was to frame in the floor.  (Am I using correct terms here?  Perhaps not.  That is why I include pictures!)  They laid the floor directly over top of the existing floor on the trailer. 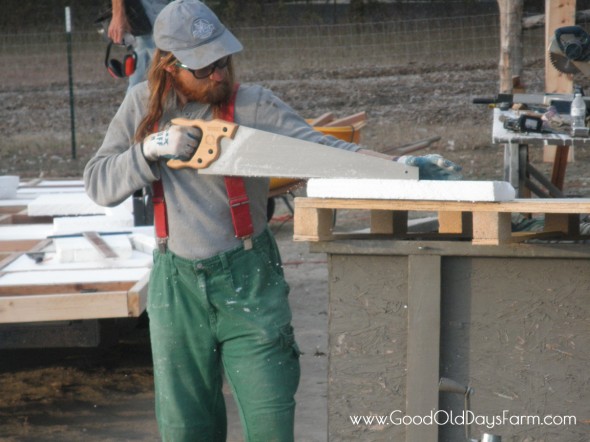 Next came the task of cutting the insulation to fit.  When choosing materials we are looking for two things:  We want materials that are as inexpensive as possible and also materials that won’t emit toxic fumes.  According to what we’ve read, toxic fumes can be a big problem in small houses because the house is so small and the fumes don’t dissipate the same way they would in a larger house.  We don’t want Grandmother breathing in formaldehyde while she sleeps!  For the floor insulation we are using this Styrofoam that a contractor’s ex-wife unwittingly inherited in the divorce.  Let me tell you… she sold it to us dirt cheap and then thanked us profusely for buying it!  It has been sitting outside for several months so  toxic fumes won’t be a problem.  Win-win for everyone.  Almost.  The reports at lunch indicated that this involved an obscene amount of measuring and measuring and re-measuring, but the guys did a great job!  By the end of the day the floor insulation was completely laid.  There’s 4 inches of insulation on that floor now: 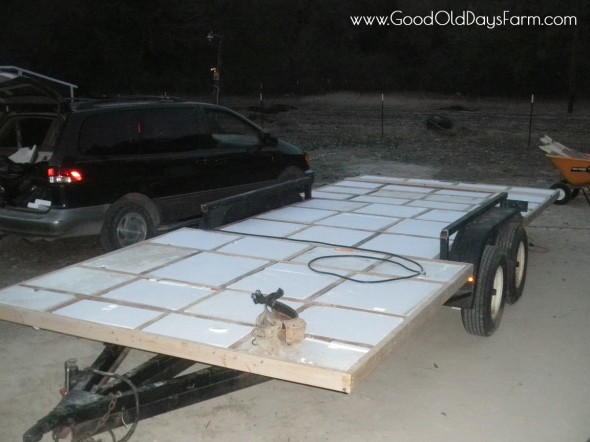 Papa the Farmer and his helpers did a great job yesterday!  You know who did not do a good job?  Me!  We ate breakfast around 7:00 but then I was so busy making phone calls and picking up materials that we didn’t eat lunch until 2:00!  I quickly realized that the only way I am going to be able to juggle my normal responsiblities with the added responsibilities of building a tiny house is to have a menu plan.  So I sat down and planned one out.  I logged in to Meal Planning Central (I’m a lifetime member!  That’s an investment right there!) and the whole process took about 15 minutes.  After I selected the recipes, I jotted my menu plans down onto this great menu planning form that I found over at The Nourishing Home.  I downloaded the template and changed the name to our family’s name and now I have a pretty little printable for my fridge! 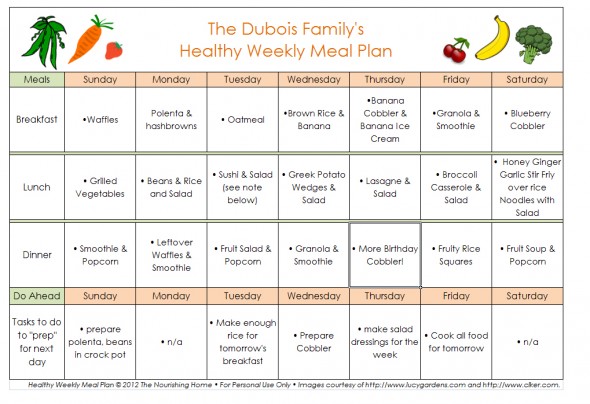 Our family is vegan and gluten free, so menu planning is a challenge at the best of times!  But this form is so perfect for me!  With a diet like this we really have to plan out every meal including breakfast!  So I really liked that this form allows me to do that.  Plus it has a space at the bottom for me to make note of what I can do the night before to prepare for the next day!  That bottom row right there makes my life so much easier! And let me tell you, my construction workers were pretty happy to see that I have a plan and they’ll be eating on time from now on!