Autumn marks “Birthday Season” at the Good Old Days Farm!  Of the 5 members of the family, 4 of us have birthdays in the next 6 weeks!  Having almost all the birthdays at once like that could get very expensive if we let it get out of control!  So we are always looking for frugal ways to celebrate!

This year FarmGirl wanted a new doll stroller and maybe even a new carseat for her babies, too!  I must say, her old doll stroller has seen better days: 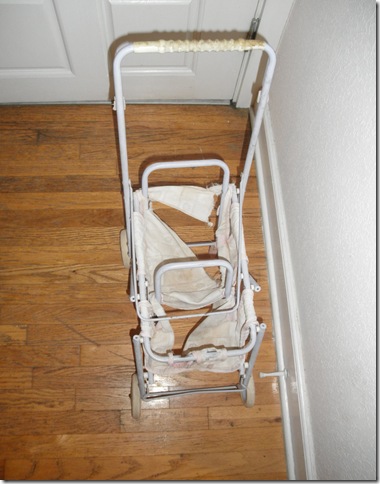 This doll stroller was an adorable $3 thrift-store find five years ago!  In those five years it has been used… and used… and used!  Come to think of it, I can remember FarmBoy and FarmBaby both being pushed around the house in that stroller as tiny babes!  All in all, I think I got my $3 out of this particular purchase!  So I headed off into town to find FarmGirl a new-to-us doll stroller.

First I checked every thrift store in the nearest 3 towns.  Not a single doll stroller would be found.

Then I checked Craigslist.  No luck.

Finally I thought I would bite the bullet and buy one new so I went to the store.  The only one available was $50.  I mean really!  I can go over to the baby section of that same store and get an umbrella stroller for a real baby for only $20!  So then I started shopping for a doll carseat.  The only one I could find was $29.95.  Thirty dollars to save the life of a doll???  I don’t think so.

With the birthday looming ever closer, I had to do something!  It occurred to me that perhaps the doll stroller we already had could be given new life.  I took all the current fabric off (a job that was already pretty much done for me!) and already the stroller looked much better! 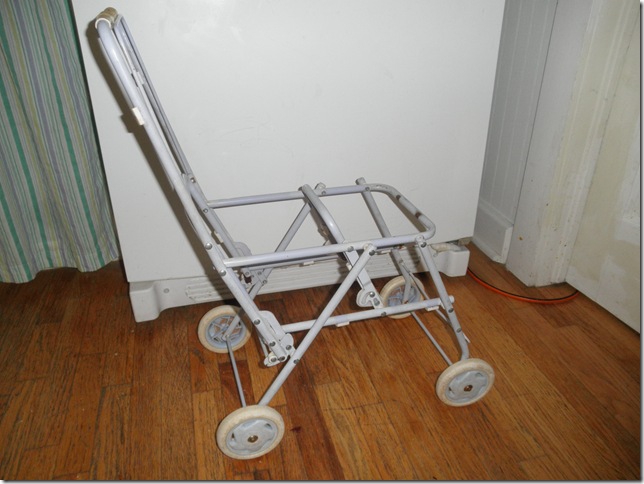 Then, I got busy with some newspaper.  By laying the old pieces on the newspaper I was able to see how the seats had originally been constructed, trace them and Ta-Da!  I had a pattern! 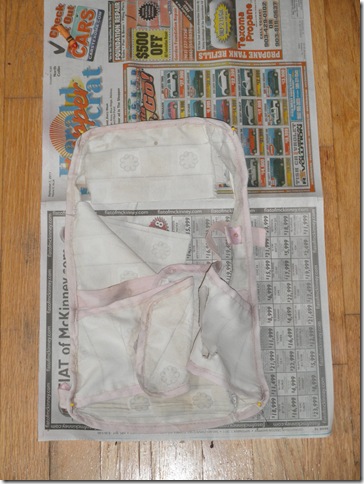 Soon, with some scrap fabric I had in the closet, FarmGirl’s beaten-up-has-seen-better-days-doll-stroller had never looked better! 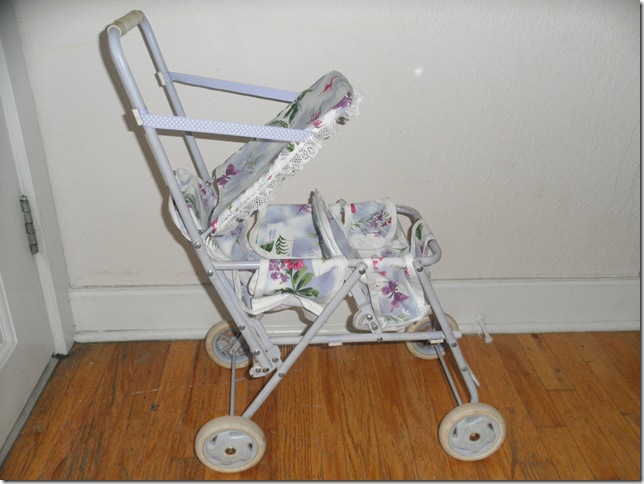 I had fabric left over, so I decided to see what I could do with her current doll carseat.  This carseat was actually my doll carseat back in 1983.  My mother saved it all those years for her only granddaughter.  The thing is, FarmGirl really wanted a canopy over the top of the carseat just like she sees in modern carseats.  This carseat was made before they started doing that, so it’s not really built to accomodate a canopy.  I got the newspaper out and cut and folded until I had something that resembled a pattern… 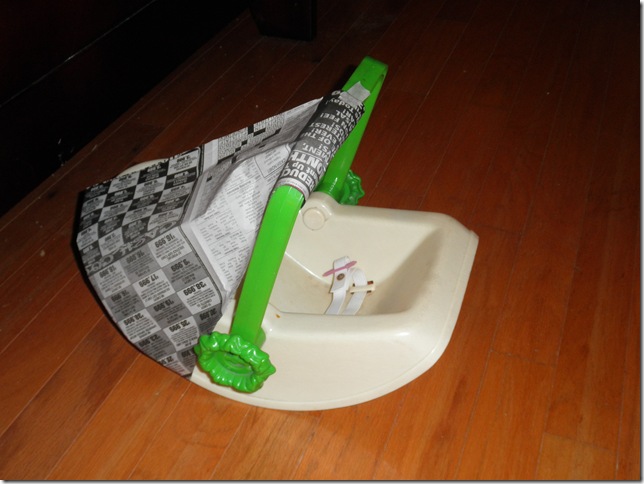 And soon, we had a fancy-schmancy babydoll carseat! 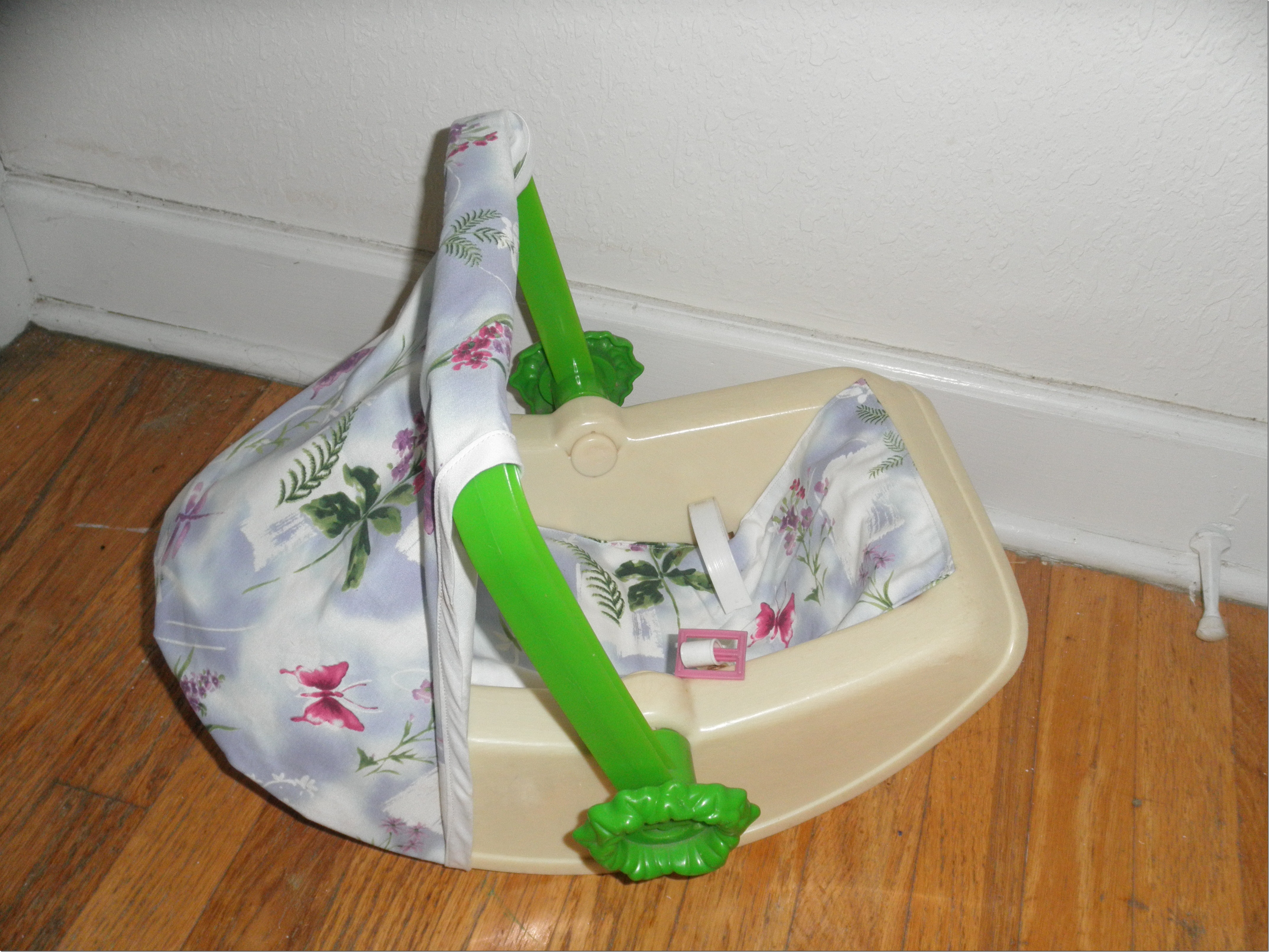 I must say, I think Farm Girl is very pleased with her new stroller and carseat!  I heard her telling her Grandmother on the telephone, “I got a new doll stroller!  Well, actually, it was my old doll stroller but Mama tore all the cloth off!”  Ummm… No, that wasn’t me that tore the cloth off.  Why is it that children always phrase things in the most incriminating manner possible?

Do you have ideas for frugal birthday gifts?  We still have three birthdays in the weeks ahead, so I would love to hear about them in the comments below!