I have discovered that I can either write about being FarmLady, or go outside and actually be FarmLady.  Apparently I can’t do both…. as evidenced by the fact that we’ve gotten a lot done here over the past few months, but not much of what we’ve been doing has turned up on the blog.  So today, instead of being FarmLady, I’m just going to write about it!  Here’s all the Good Old Days Farm news of the past few months, in random order… 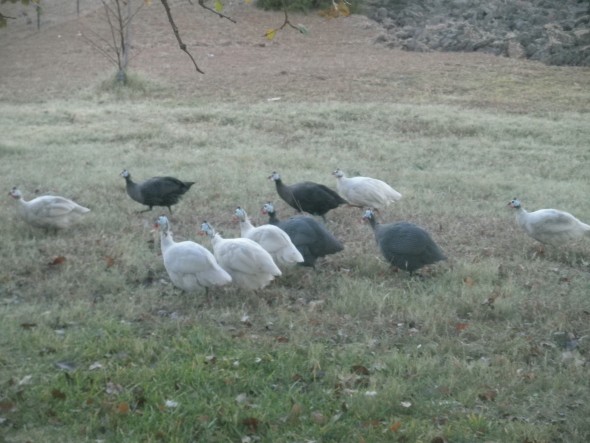 We have developed a love/hate relationship with our guineas.  They have done an amazing job keeping the grasshoppers away and we’re thankful for that….but they are loud.  Really, really loud.  And they squawk incessantly.  The guinea-farmer who sold them to us said that they squawk like this when they see something new and right now they are young and everything is new to them.  He says they will quiet down in a year or so.  And so we keep them, but that squawk makes us crazy.  There are 15 of them and so everywhere you go there’s a squawking guinea.  There is no escaping it.

But there are 15 of them!  Which means nothing has eaten any of them.  All our guineas have survived so far!

Not all our birds have been so lucky.  One day we noticed a chicken didn’t look like it was feeling well. FarmGirl picked it up and it had a heart attack in her arms.  He jumped out of her arms and hit the ground, dead.  That was a sad day.

But not as sad as another day this fall.  It was the first chilly morning of the year and all the birds were wandering around the yard.  Papa the Farmer quietly pulled me aside and said, “Um, have you seen the duck today?”  Now please remember that the duck was a special gift for FarmGirl.  She has always loved ducks and she could quack before she could talk.  We don’t really have a use for a duck, but we bought it on impulse and FarmGirl really, really loves that duck.  We looked and looked everywhere for the duck.  Since it was the first cool morning of the year the thought did occur to me that perhaps our duck had decided to migrate.  When I told the children that the duck was missing I offered them the migrated-to-Mexico possibility to soften the eaten-by-a-coyote possibility.  The boys were excited about the possibility that this spring FarmDuck will return with babies!  (I hope that happens, but I do need to tell you that this was a male duck!)  But FarmGirl was devastated.  At first she took the news very quietly.  She bit her lip.  Then a tear rolled down her face.  Then she was sobbing… loud, terrible, body-wracking sobs.  And then I was crying too.  Partly for the duck, but mostly for my little girl’s broken heart. 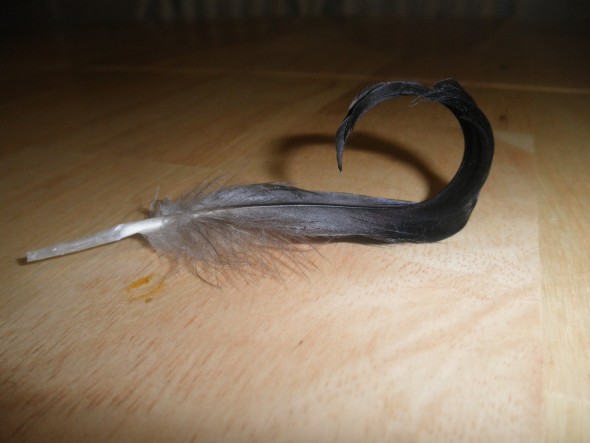 Later that day, we did find a pile of feathers and our duck’s signature curly-feather under the pecan tree.  So there is no doubt now.  There will be no happy homecoming in the spring.  We will not wake up one morning to find our beloved duck walking up the driveway with Mrs. Duck and his long line of babies.  But we will frame the feather and buy more ducks next spring.

Not having a duck has been a hardship.  The guineas and chickens had come to think of the duck as their mother.  They would follow the duck everywhere.  When it was time for bed the duck would waddle into the chicken coop and all the birds would follow.  Now without the duck, the other birds won’t go into the coop by themselves.  They have to be chased and coerced every night.  And sometimes a guinea or two won’t go in at all.  They fly high up into the cedar tree and roost there for the night.  Sometimes the chickens will follow them up… and once they’re up in the tree there is no getting them down again until morning.  So far we have not lost any birds overnight when they are high in the trees. 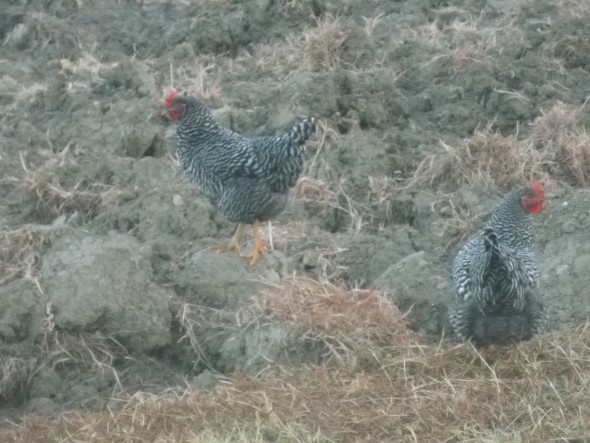 We have lost more chickens, but not at night.  One day I saw three chickens wandering around the yard.  We were all outside and when I looked over an hour later there were only 2 chickens.  And a pile of feathers.  Something was bold enough to grab a chicken when we were all right there… and quiet enough that nobody suspected a thing. 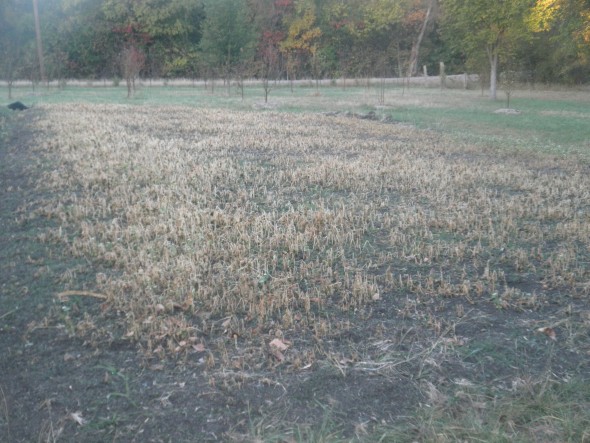 We’ve had just enough frost to kill anything that was growing in the garden (see our buckwheat patch, above?)… 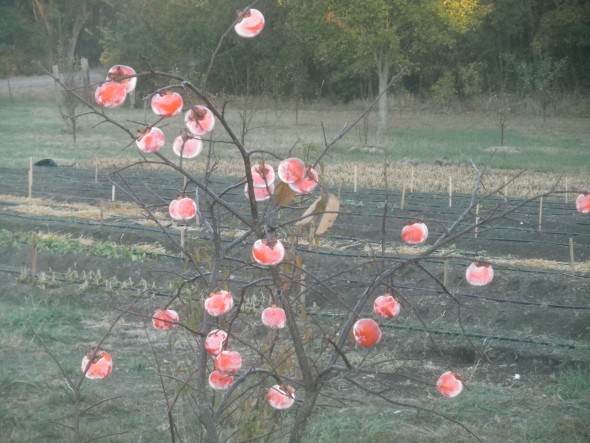 But the persimmons ripen up as it gets colder… so they’ll be ready soon!  We’ve already eaten a few and right now it’s still hit-and-miss.  To borrow the words of an old nursery rhyme:  when a persimmon is good, it is very, very good; but when it is bad it is horrid! 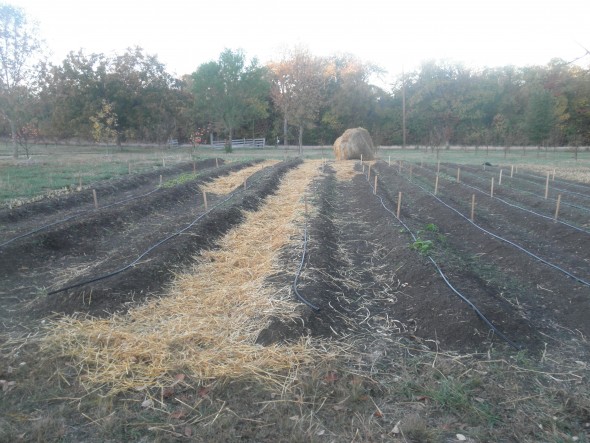 Now the goal is to be ready for next spring.  We’ve added this vegetable bed down near the orchard… 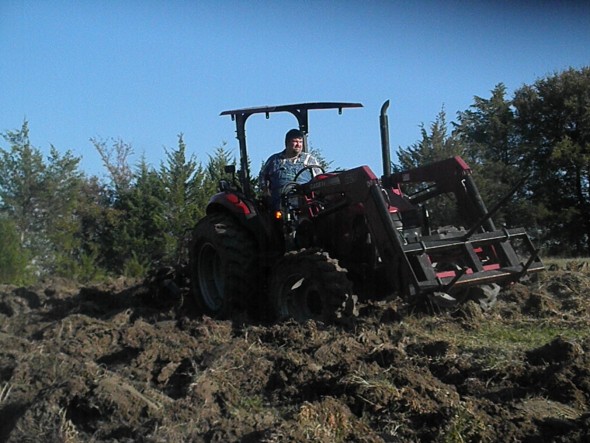 And one day our neighbor came over with his tractor and dug up the ground in the front yard for us.  The idea is that the roots will die, and next spring’s garden will have fewer weeds. 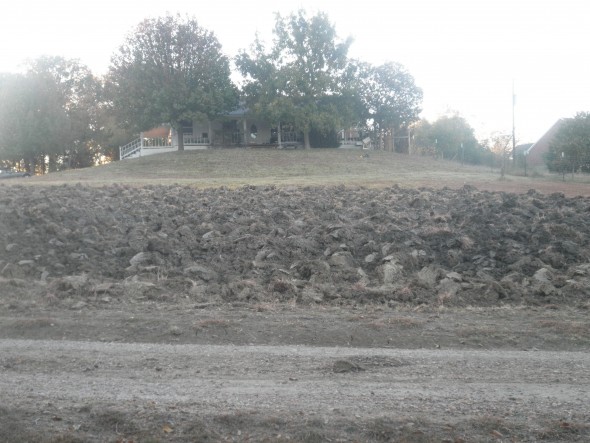 For now, my front yard looks like this, but just imagine the view next spring when that bed is full of vegetables!  Yum!

Oh!  And I almost forgot!  We have a super-special surprise that we’ll be announcing on the blog tomorrow… So be sure to check back tomorrow!