I took the Little Farmhands to the zoo by myself yesterday.  On the way home I was tired, we were stuck in rush-hour traffic and I was still an hour away from home when I missed my exit and ended up on the service road that runs along the side of the highway I needed to be on.  Frustrated, I pulled up to a stoplight, looked out the window and noticed a man standing on the meridian.  I was in the middle of what I call “Software-Engineer Country.”  It’s an area of town where all the big buildings for all the big software companies line the highway.  This man was clean-cut and wearing office clothes.  He looked like a software engineer from one of those buildings to me.  And there he was on the side of the road, holding this sign: 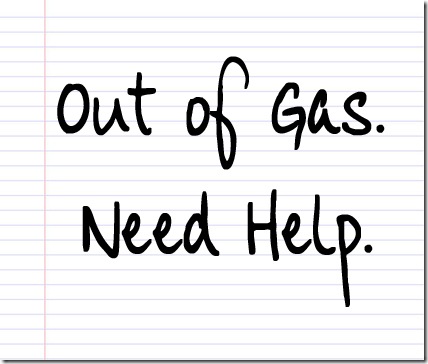 By the time I noticed him, the light had changed and traffic was moving again.  I couldn’t stop so I kept driving and I pulled over into the first parking lot after the intersection.  From there, I was close enough to see him, but too far to call out to him.  The Little Farmhands had all fallen asleep.  I couldn’t just leave that man on the side of the road, but I couldn’t do much to help him either.  What I could I do?

So, I just sat there in the parking lot, looking at him, not knowing what to do.  By then, the Little Farmhands had woken up and wanted to know why we were just sitting on the side of the road.  I pointed the man out to them and explained his situation.

There really was only one thing we could do.  We could pray.  And so sitting there in that parking lot, we prayed and asked God to send somebody to help him.

We opened our eyes and could hardly believe what we saw!  Where there had been nobody a moment ago, there were now two men standing at a stoplight.  The light changed and they dashed across the road over to the man with the sign.  The greeted him, shook his hand and it was clear that they were there to help.  It was as if God had just been waiting for somebody to ask him to send help.

We thanked God for answering our prayer so quickly and as we pulled away I was struck by the thought that this man had no idea there was a van full of children 200 feet away, praying for him.  I wonder how often it happens like that.  How often are we discouraged, feeling like nobody notices and nobody cares and everybody is just busily going on with their own lives, when in reality there just might be somebody close by praying for us, and we don’t even know they’re right there petitioning heaven on our behalf!