Hey everybody!  Wanna have a contest to see who had the most unusual Mother’s Day?

Never mind…  I’d win my own contest and that wouldn’t be polite.

My Mother’s Day started a bit early…  Papa the Farmer and I are working really hard to make this farm a success.  One thing we’ve been missing is animals.  We are a little fruit orchard smack in the middle of cattle country!   But as vegan vegetarians, what animals would be an appropriate addition to our farm?  We were talking about this and we came up with an obvious suggestion:  Alpacas.  Alpacas are gentle and their wool can be sold to spinners, knitters and weavers.

Then, a friend of mine posted this on Facebook: 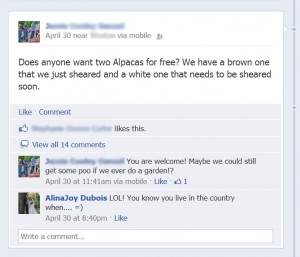 So God (and my friend!) provided us with two alpacas!  Papa the Farmer went and picked up the alpacas later that week.  Turns out you can transport them in a minivan!  No fancy trailer required! 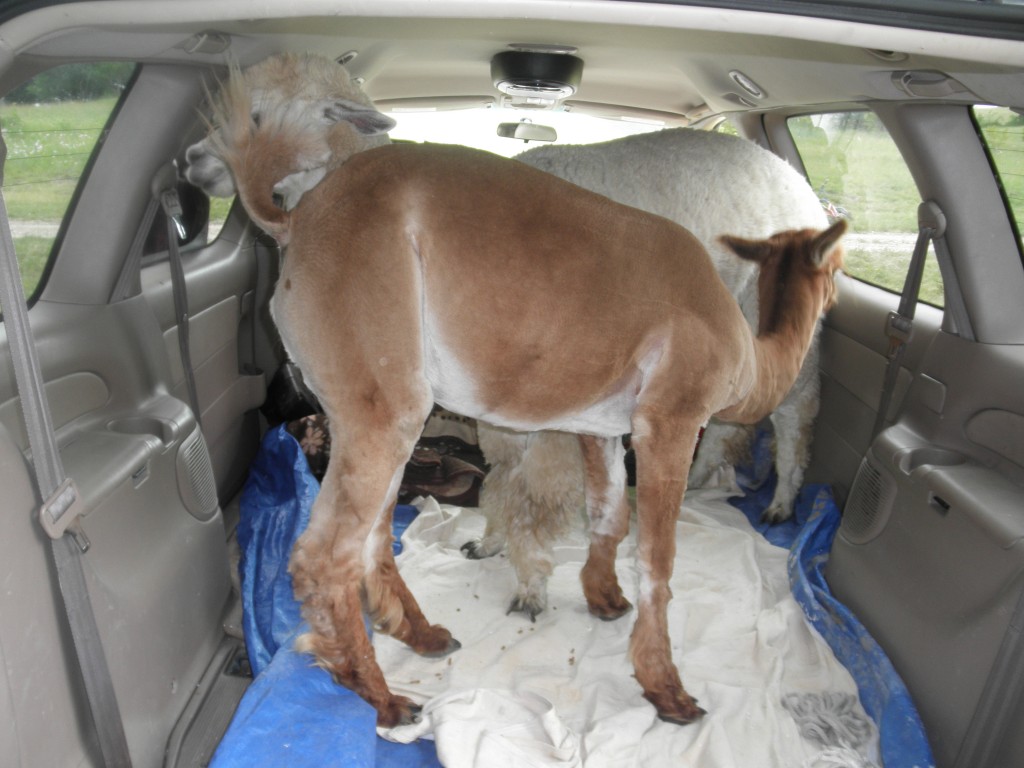 As soon as that brown one jumped out of the van, FarmBoy delightedly squealed “Carob!” and that has been his name ever since.  The white one was already named “Mr. V.” and so we’ve been calling him “Mr. Vanilla.”

Want a closer look at our new family members? 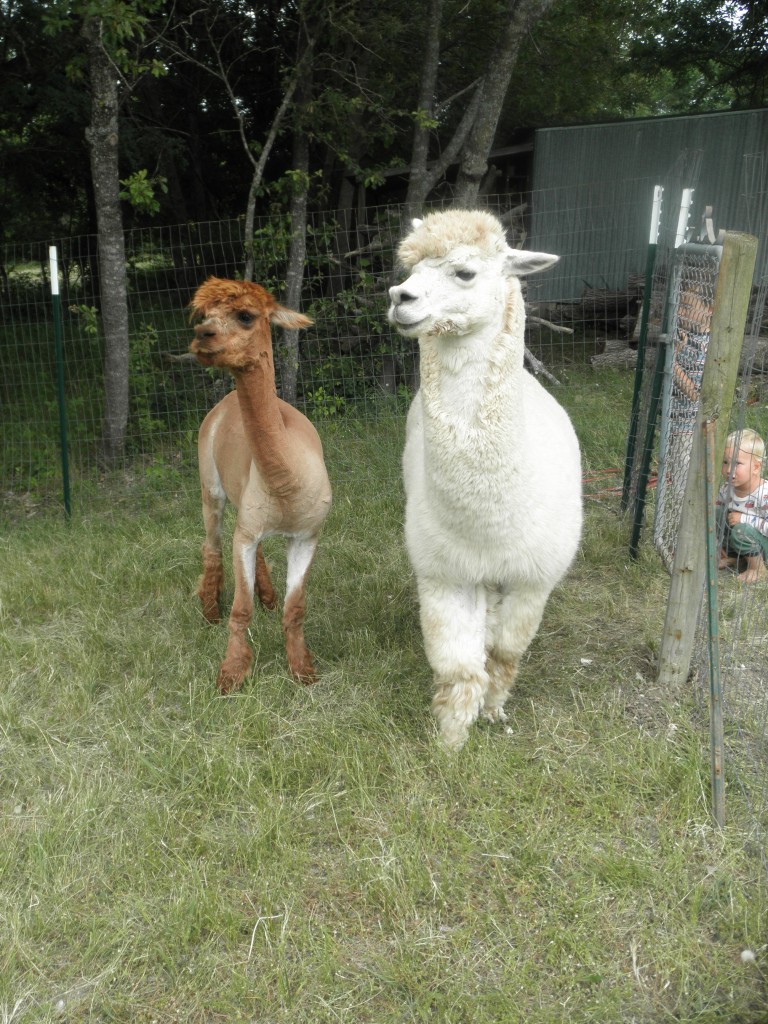 I’m not really an animal person, but alpacas are a pretty nice pet to have.   They’re gentle and they just wander around the yard eating grass. 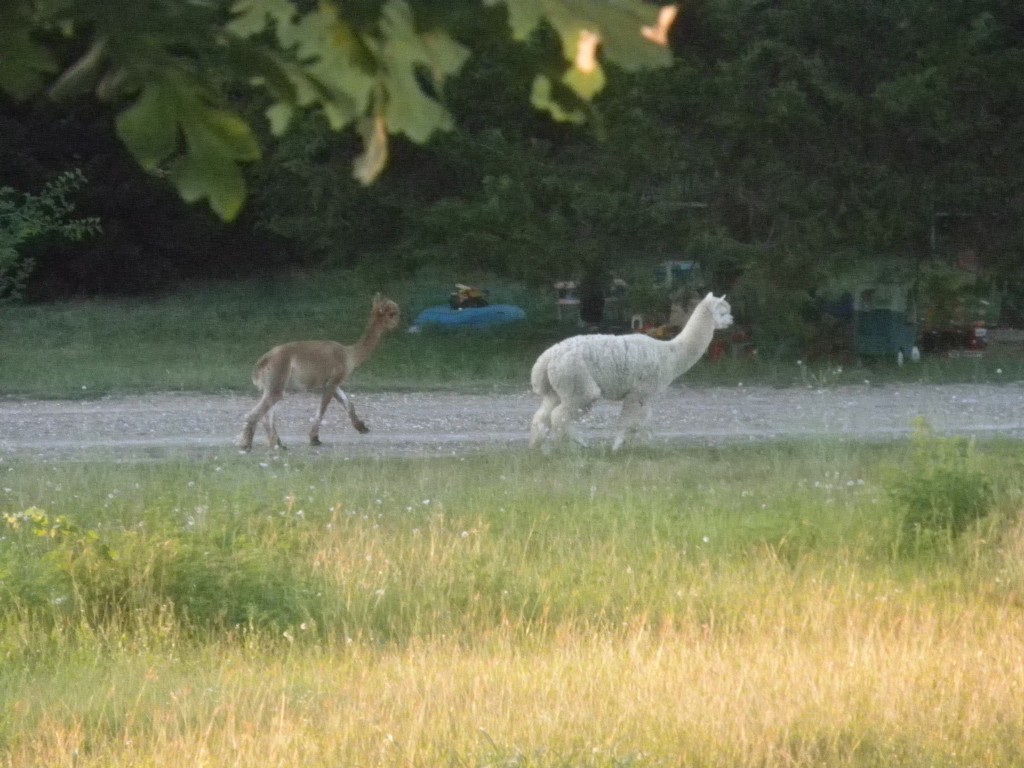 Of course, we don’t trust them to leave our fruit orchard alone!  And since that fruit orchard is our livelihood, Papa the Farmer and his trusty helper installed a fence. 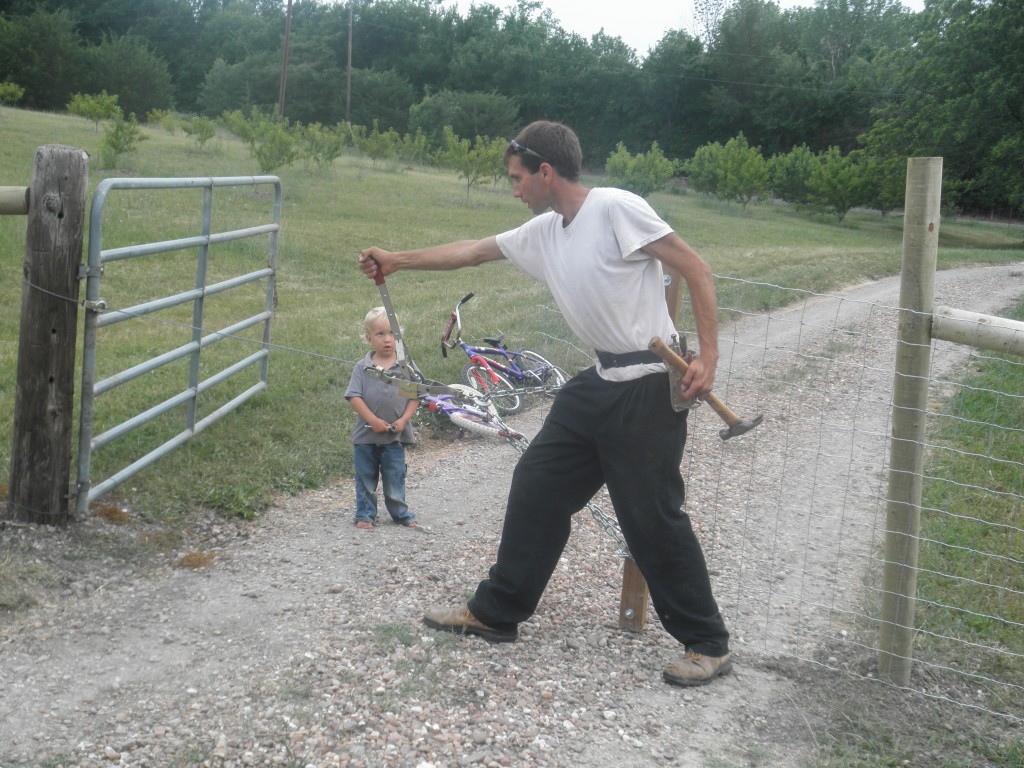 The fence was expensive.  “This is your Mother’s Day present, you know.”  Papa the Farmer said to me.  “If you’re really lucky, I’ll get you some guinea hens too.”

Great.  I’ve told you before that I am not a farm-girl.  Chickens are not my idea of a cool Mother’s Day gift.  But, the grasshoppers are already starting to attack the vegetable beds and the only way to avoid spraying poisonous, toxic chemicals on them is to introduce something that will eat them.  Guineas.  So off we went to the guinea farm… 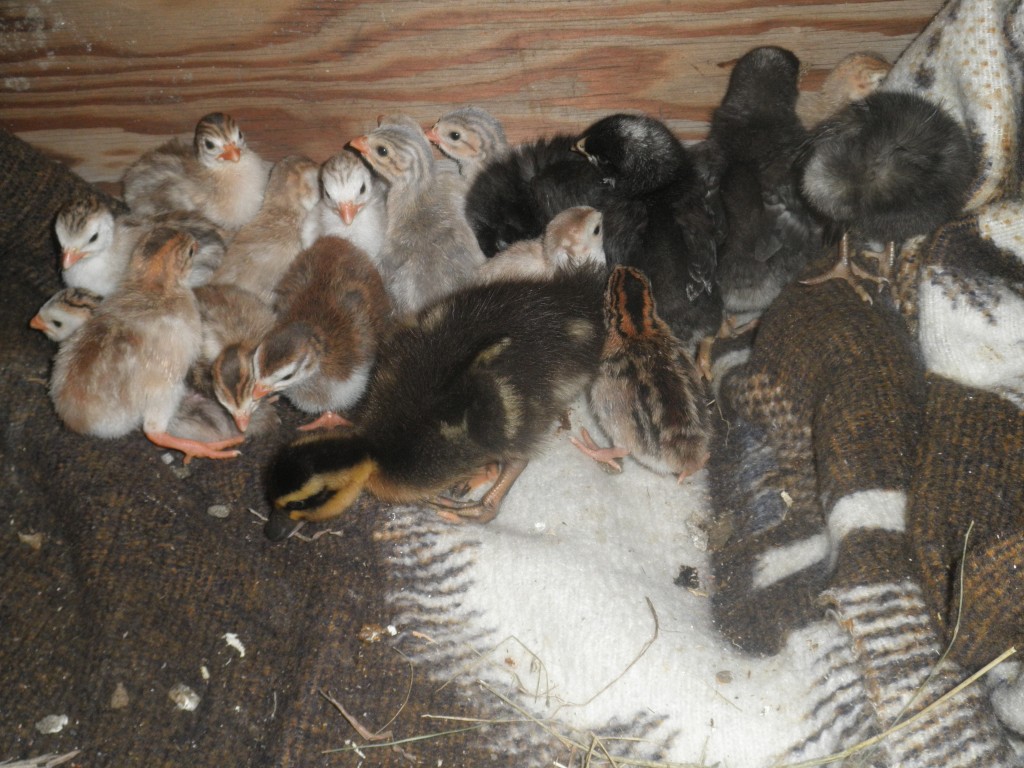 And we came home with 15 guineas!  (You can see them in this picture.  They are the light colored chicks on the left.)  But guineas are kind of independent.  They do a great job eating grasshoppers, but they don’t make the best pets.  Some chickens are personable (I am told), but guineas aren’t that way.  So we stopped by the feed store and also got 4 Barred Rock chicks.  Barred Rock Chickens are friendlier and make good pets.  (At least, that’s what I hear.  I guess time will tell!)  We also got a duck.  Because it was there.  And FarmGirl really wanted a duck.  She rarely sets her heart on anything, but she really wanted a duck.  So she got one.  For Mother’s Day.

We’ve had our fowl-flock for a few days now.  It turns out it’s true… The guineas don’t like being picked up but the Barred Rocks don’t seem to mind.  And the duck positively likes it. 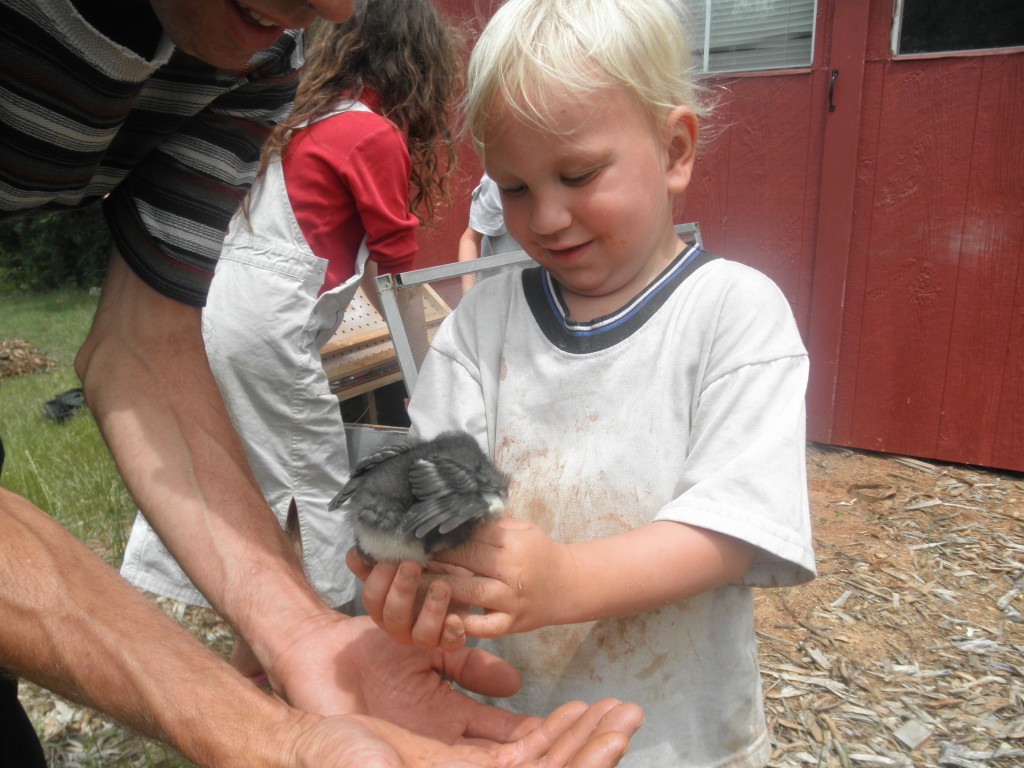 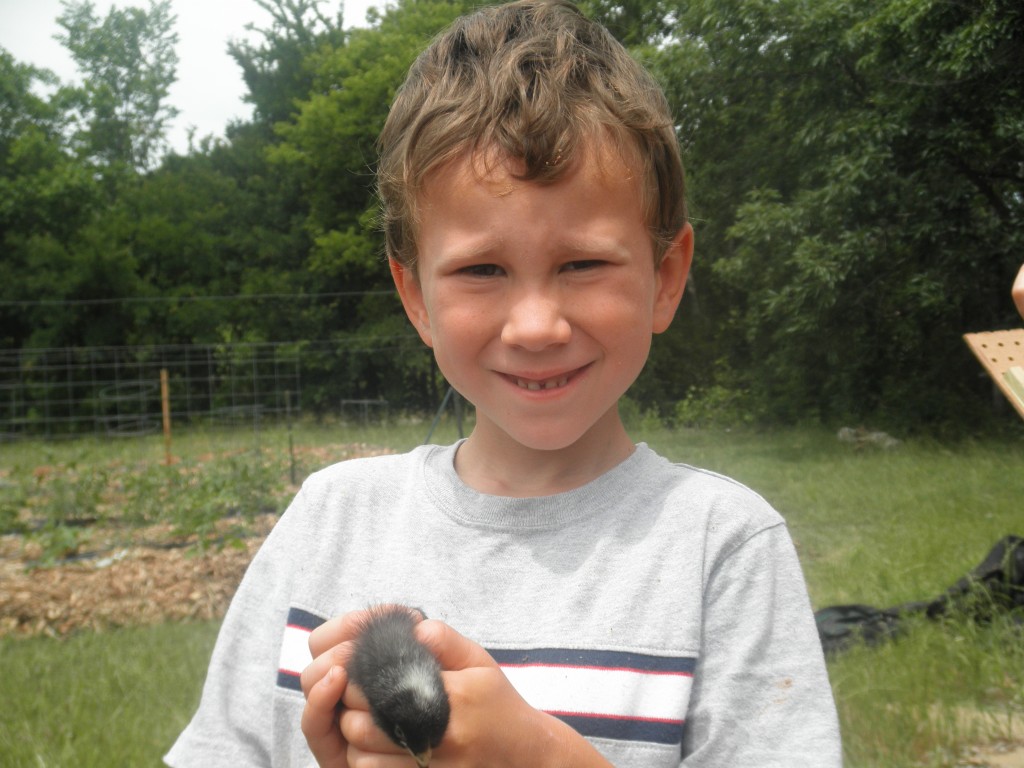 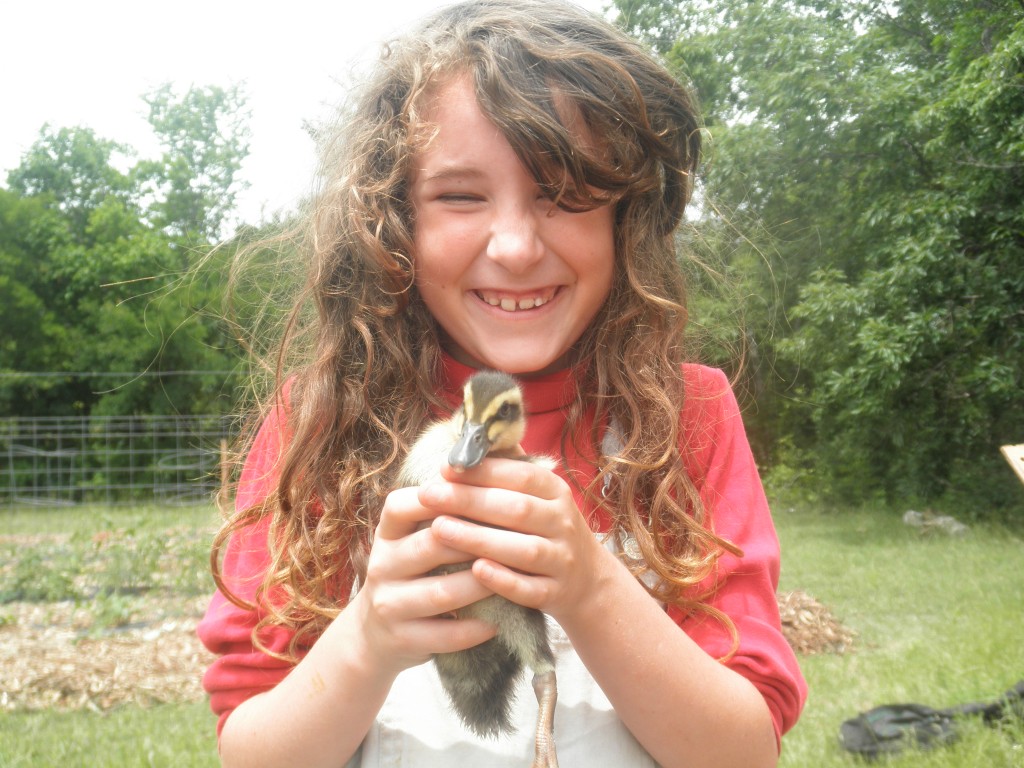 See how much she loves her duck?  How could we say “no”?

But lest you think that all I got for Mother’s Day was 2 alpacas, 15 guineas, 4 barred rock chickens and a duck…. Not at all!

On Friday I spent a couple of hours working at the library.  When the library closed I called home and Papa the Farmer said, “Can you find something else to do for an hour or so?”  Um, ok…

Well, when I got home, I glanced in the window as I was walking up to the door and noticed a brown paper bag on the table that said, “To: Mama” on it. 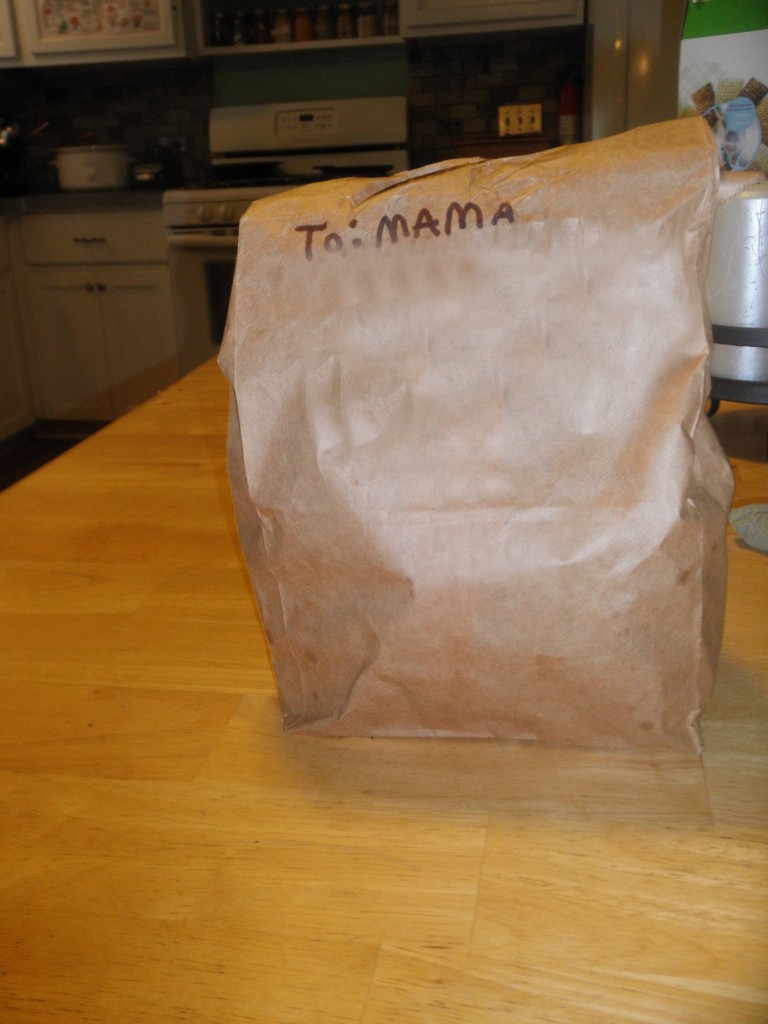 I opened the door and the house was smelling really, really good!  Like-freshly-baked-cookies-good!  (I never met a cookie I didn’t like!)  I stepped into the kitchen and noticed the bag had disappeared!  So I turned around to put the groceries down and saw the bag “hidden” in plain view on the floor.  I pretended I didn’t see it, but FarmBaby was pointing to the bag and saying, “Cookies!”

“FARMBABY!!!” everybody yelled in a mixture of shock and disappointment.

I had to salvage the moment so I pretended to be clueless.  “No, I didn’t buy you any cookies.”  I told him.  “I bought you spinach and salad and tomatoes.”

And then this morning I got breakfast in bed!  Papa the Farmer had to wake up extra early and sneak out to the grocery store to get some special ingredients for me before I woke up.  (Which is no small feat!  The grocery store is 25 minutes away!)  Then the two oldest Farmhands climbed into bed with me while Farmbaby slept and I ate this delicious breakfast: 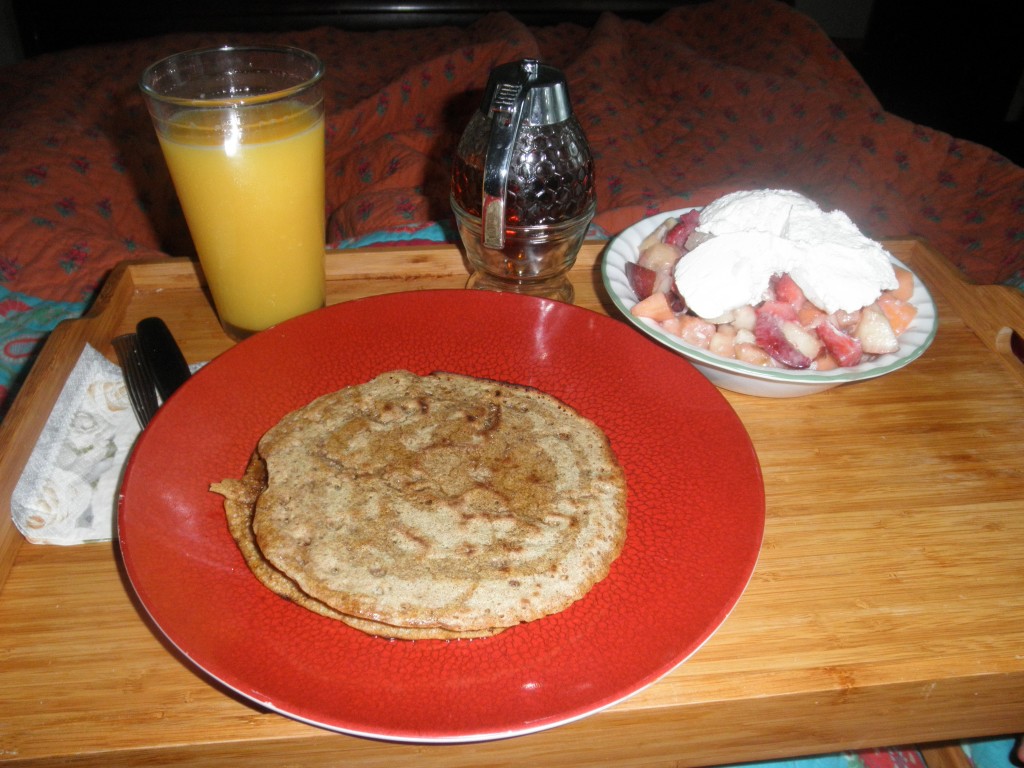 I would show you a picture of everybody in my bed, but we’ve all got bed-head really bad and plus I’m in my pajamas and do I really have to have 1,000 blog readers in my bedroom looking at me in my pajamas with really bad bed-head on Mother’s Day?  I didn’t think so either.  So please just look at those pancakes and orange juice and pretend it’s as interesting as that other picture would have been.

That red plate is our special plate.  It’s a plastic plate I bought somewhere for $1 and we use it to honor special people.  I got the red plate today!  And I’ll be the last one to get the red plate, because on it’s way back to the kitchen the little server tripped and the special red plate broke.  Now it has a hole right in the middle that you can peek through.  We had some fun looking at each other through the whole in the middle of the special red plate.  The bottom of maple syrup container broke too, but the top is alright so we didn’t lose any syrup and that’s the most important thing…

And then, I got one final Mother’s Day present.  The children went outside and got me… 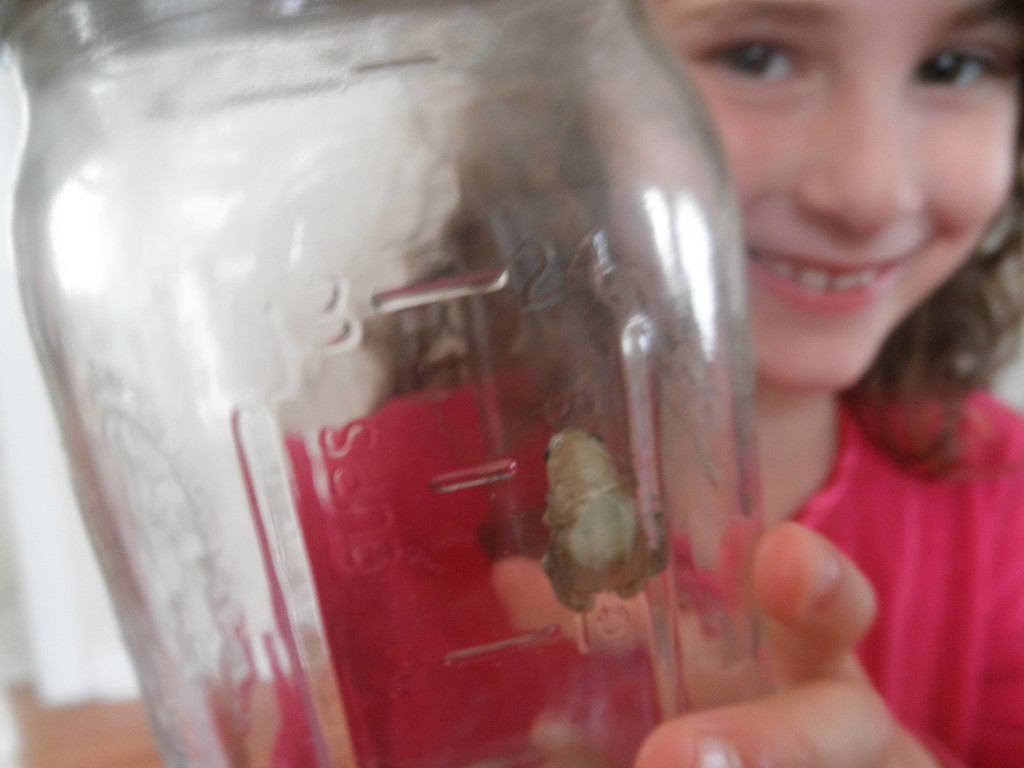 My very own frog!

Now if that isn’t love, I don’t know what is!